In the absence of other events running, the sailors at Leigh & Lowton decided the North West needed a long-distance race somewhere in the season. They concluded that overnight sailing was too precarious to allow a 24hr race in the deep waters of the Flash and full darkness, so the concept of a Sunrise to Sunset Race was born, on a weekend close to the Summer Solstice. 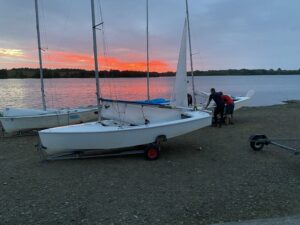 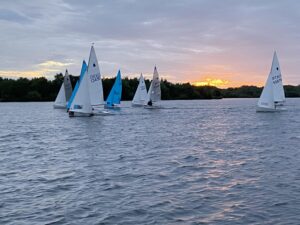 The eye-watering 4:40am start had the opening shift sailors all groggily pulling up sails and getting on the water as late as possible, but in a magnificent sunrise. Some teams only launched from the shore with less than 30 seconds to go, cutting it as fine as they could! The first lap proved to be a test for most boats as everyone got a feel for the course in the light breeze. The shoreline proved to be a difficult place, with boats stuck in sections of wind shadows, even the locals falling prey to the lakes sneaky tricks. 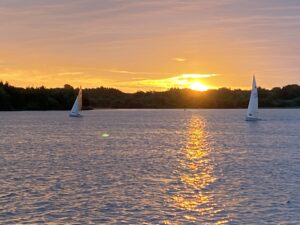 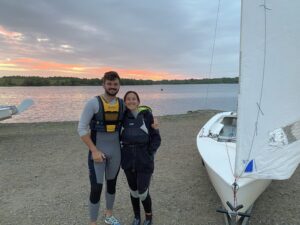 Throughout the day four different teams took the lead, sitting at the front of the fleet for different lengths. The top visitor entry came from Combs/Toddbrook Sailing Clubs, who gave the entire fleet a run for their money. They took the lead from about midday from the Enterprise Team Southwell and managed to hold it, regularly extending away from everyone else. In the late afternoon the fight at the front narrowed down between the GP14 of Combsbrook 1 and the home team Night Birds, with Night Birds attempting to take the lead a few times and only holding it for less than a lap or two. Combsbrook’s pace never seemed to falter. 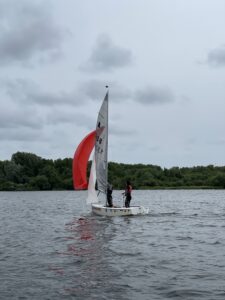 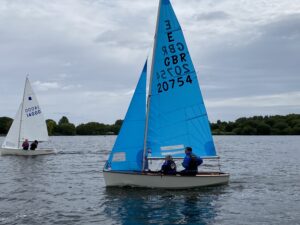 Even when the gap between these two teams was at its largest it was only a four-minute lead. Over 17 hours this endurance was nail-biting. 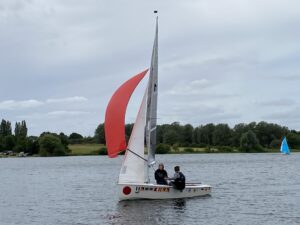 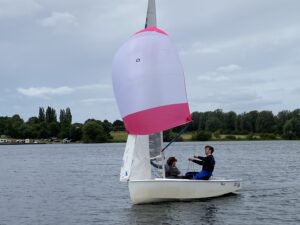 Entering the final hours of the race the last changes jumped in the boats around 8pm. With everyone now spread around the course and mostly settled into their places the race felt close to its end. Even the close fight at the front of the fleet had separated to be almost a half lap. The wind was fading and the chances didn’t look good for Night Birds in second place, or Team Southwell in 3rd. Most of the shore-side sailors clocked off for the night and headed to the bar for a well-deserved beer and a chat.

Two laps before the end of the race the excitement started to pick up again. Night Birds (Jamie Catchpole/Becca Fleet) were gradually reeling in Combsbrook. They closed the half lap gap and both boats made their way upwind, throwing in tacks to try and catch every possible helping shift. Night Birds hadn’t been this close to Combsbrook for hours. 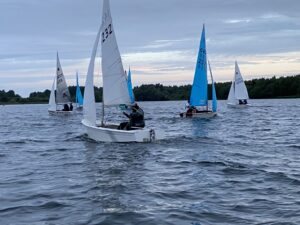 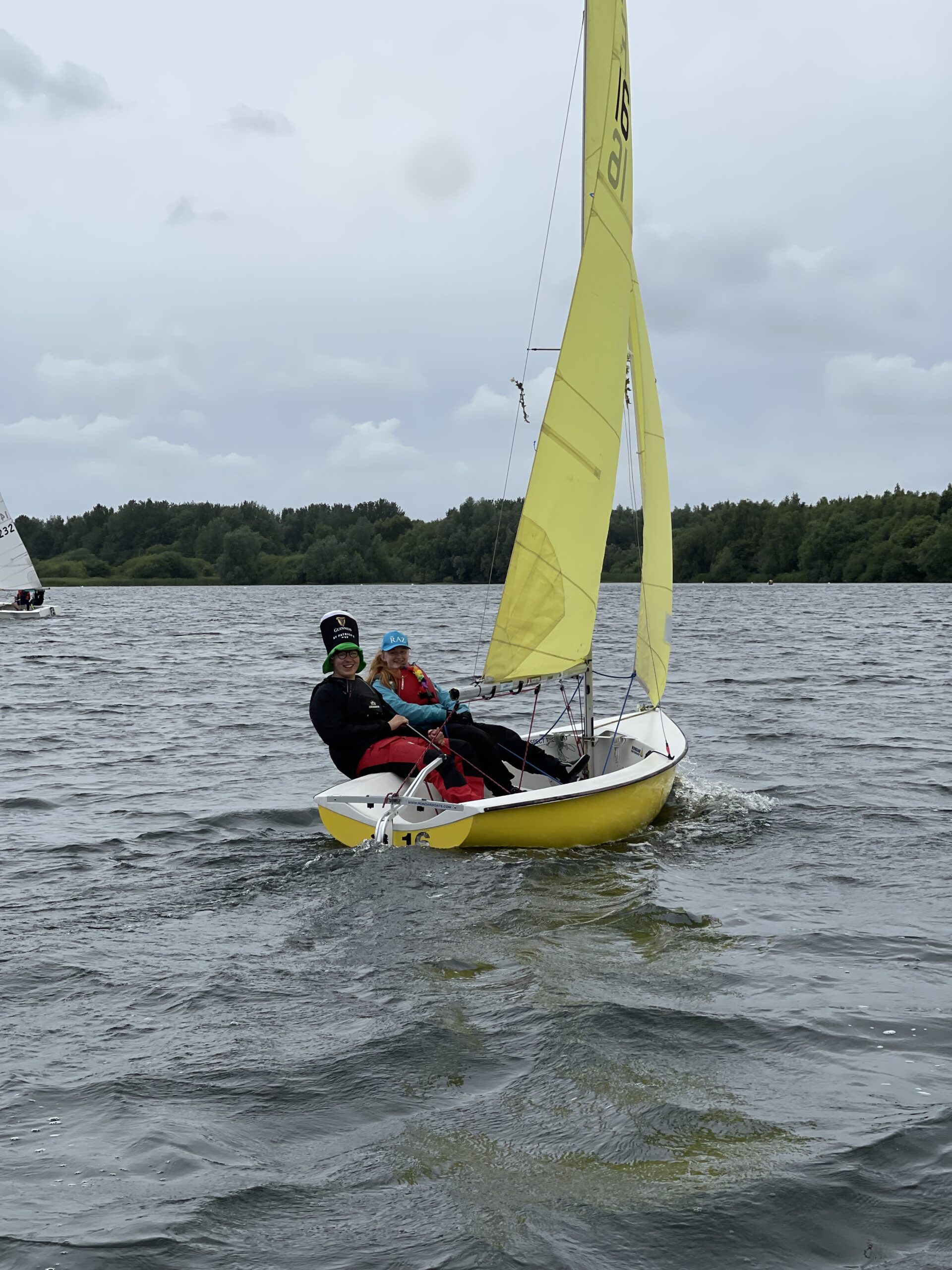 Night Birds crawled ahead in the light and shifty breeze, making it to the windward mark in first place. Pressure was on to hold the lead they’d been struggling to keep off Combsbrook all day. However, Combsbrook sealed their fate with an unfortunate incident at the top from a boat a few laps behind in the race. They took a penalty spin while Night Birds hoisted their kite and drifted away. The race finished not even five minutes later with committee boats sending everyone home for the night.

The fleet of boats crawled into the shore with teammates coming down to help derig the boats and pass off beers to the finishing crews. Prize giving rolled around and kicked off at 10:30pm after everyone was changed in the clubhouse. The mini-series races from throughout the day went first, with prizes like ‘Sparrows Fart’ for fastest first lap of the day going to the Night Birds, Fastest Cowboy Race to Night Birds again (Harvey Leigh/Lewis Coop). The kindly donated shield for the fastest 14th lap by a GP14 was mopped up by Combsbrook (Bryn Abendstern/Ed Washington) along with Midday Madness for Victoria Theaker/Lewis Coppinger.  Tea’s Up was again taken by Combsbrook 1 (Richard Abendstern/Lewis Coppinger) who were clearly on a roll by now, the Lovely Ladies of LLSC won the Ladies race against some strong competition with most teams entering a team. Combsbrook once again came good but this time in their Enterprise team for the Bar’s Open trophy, with Night Birds clocking in quickest for the final race of the day, the Masters Race for over 50’s crews.  Liverpool University picked up the !st Firefly Trophy and provided plenty of nightime entertainment alongside the team from Aldridge SC!! 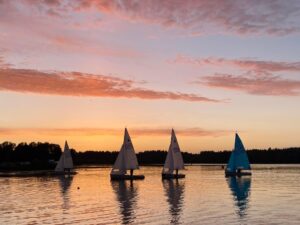 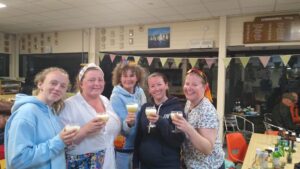 After a tough day and an impressively long back and forth between the front of the fleet, Night Birds claimed first place. Combsbrook came in second, a very well deserved and hotly fought result, and Team Southwell in third. 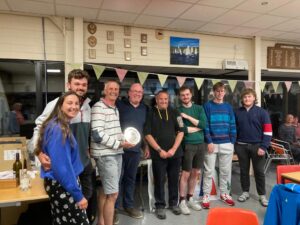 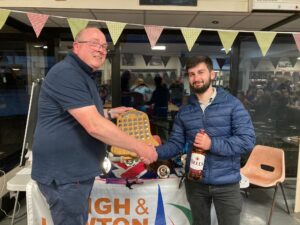 Leigh and Lowton put on an impressive event considering the lengths that the volunteers went to and the hours in the morning they were willing to be at the club. The race officer, Mike Baldwin being there from all hours in the morning until late at night. All the sailors at the event including myself hope to see the S2S become a permanent addition to the dinghy calendar. 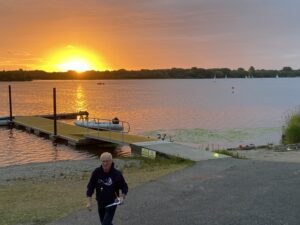